Jive Software announced that it is being acquired by a private equity firm called ESW. This acquisition news would not come as a surprise to RSG subscribers, as we've long been tracking Jive's pursuit of a suitor.

Just last week we updated our Enterprise Collaboration and Social Software research and advised customers: "Jive is at a crossroads; as an enterprise buyer, understand that there are more likely changes afoot for the vendor itself".

In a May 2015 briefing,  "What does the future hold for Jive Software", I outlined two scenarios for the company — (1) continue the course as an independent company or (2) get acquired — and estimated that scenario #2 had a much higher probability. In that sense, the acquisition was a "known unknown:" only the "when" and "who" of the acquisition were awaited.

But before we dwell on that calculus and resulting impact on customers, let me acknowledge Jive's pioneering role in the enterprise collaboration and social software market. To be sure, they went overboard in singing the virtues of "social business software", but they contributed to establishing "social" as an enterprise software segment. Over the years, competing vendors large and small fell by the wayside or remain as marginal players in this segment (think Oracle), but Jive landed large enterprise customers and became a public company.

It has had to fend off competition from deep-pocketed rivals such as Microsoft, IBM, and SAP. You could say that against odds, Jive made a significant dent in the social-collaboration technology space and the Jive team can be justifiably proud of that.

Competition More Intense Than Ever

Circa 2017, the competition in the enterprise collaboration space is even more intense - Google is more interested than ever, Facebook has entered the fray, Atlassian is more ambitious, and tech unicorn Slack has raised huge amount of capital (~$540 million dollars, which is more than the purchase price of Jive).

So, ultimately Jive did get dwarfed by the big vendors and its financial underperformance left it without the resources necessary for such fierce competition.

As you can see, the impact on existing customers is not favorable (compared to other vendors in acquiring them) when a private equity firm ends up as the owners of a software vendor.

I outline the typical Private Equity Playbook here. In short, a private equity firm typically buys an underperforming company and tries to improve the bottom line in short order (i.e., in 3-4 years).

What levers do they pull in this pursuit?

You may also see some churn in personnel. Then there is financial engineering. If any debt financing was necessary, part of future cashflows need to get applied to repayments. It is difficult to see how these changes do not impact customers in the medium term.

Don't be surprised to see a rather different Jive in the next few years, especially if you license the internal ESN offering, which could become the odd man out under the new owners.

RSG subscribers are encouraged to read our complete evaluation of Jive's technology and advisory briefing on Jive as they consider their enterprise collaboration technology choices. 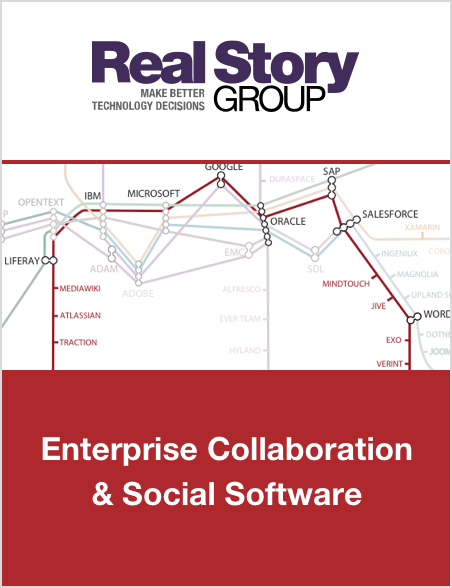 What the New 2018 Subway Map Says About Digital Marketplace Trends

What lessons can you draw from RSG's latest subway map?

Lessons from the Death of Google Search Appliance

GSA is particularly interesting because it was arguably the first major attempt to lift-and-load consumer technology into the enterprise. Let's review some of the good and bad that transpired

Facebook and Google talk about new revenue streams but investors still consider them advertising companies, and you should too.

At this stage, you want to ensure that you're taking a holistic view of what life would be like with this particular solution.

Marketplace Quadrants: When winners are really losers (and vice versa)

Get a sample Collaboration vendor evaluation.